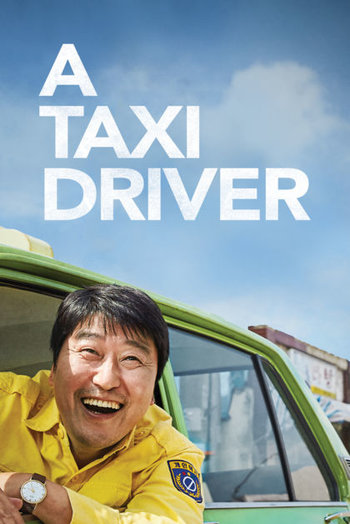 A Taxi Driver is a 2017 South Korean historical fiction drama film that depicts a financially struggling taxi driver in 1980 South Korea finding himself forced to ferry a German reporter to Gwangju out of desperation to pay rent. It is one of the highest grossing films in South Korea and has earned rave reviews from both domestic and international critics.
Advertisement:

The film's primary and titular character is Kim Man-seob (Song Kang-ho), a widowed single father who is forced to care for his daughter. Being strapped for cash and already late on his rent due to short-paying customers, Man-seob is forced to ferry Peter (Thomas Kretschmann), a German reporter who doesn't know Korean, who commands Mr. Kim to drive him to the Gwangju massacre so that he may film it and expose it to the international press.

A Taxi Driver was submitted to the 90th Academy Awards for Best Foreign Language film as the South Korean entry, but did not get nominated. Instead, the award went to the Chilean film A Fantastic Woman.

Not to be confused with the Martin Scorsese film Taxi Driver.