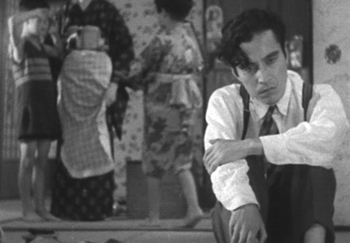 Tokyo Chorus is a 1931 film from Japan, directed by Yasujiro Ozu.

Shinji is a young insurance salesman in Tokyo, husband, father of two. He is something of a rebel and a free spirit, a bit more nonconformist than an office drone. One day he's too rebellious, arguing with his boss when the boss fires an older employee, and getting himself fired as well. Shinji must then scramble for work in a struggling economy.

Tokyo Chorus is a silent film. Silent films hung on for a little longer in Asia than they did in Hollywood; Ozu didn't make a talking film until 1934.