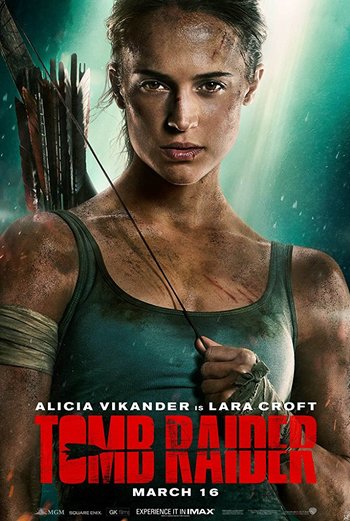 Her legend begins.
"Lara, there was more to my life than boardrooms and business deals. There's an organization called Trinity, who’s looking to start a global genocide. You must stop them, Lara. Promise me."
— Lord Richard Croft
Advertisement:

Tomb Raider is a 2018 film based on the video game series of the same name. More specifically, it is a Live-Action Adaptation of the 2013 game, with some story elements also taken from Rise of the Tomb Raider. Norwegian director Roar Uthaug directed it, and Junkie XL composed the soundtrack.

It concerns Lara (Alicia Vikander), the fiercely independent daughter of missing billionaire and adventurer Lord Richard Croft (Dominic West), who is believed to be dead. With the help of sailor and indebted gambler Lu Ren (Daniel Wu), whose father's disappearance is linked to her father's, she decides to find him, which leads her to the uncharted Japanese isle of Yamatai, on which the mythical Queen Himiko, who was said to have powers over life and death, is buried. She then bumps into an expedition sent by the shadowy organisation called Trinity and led by Mathias Vogel (Walton Goggins).

A sequel is in development, though suffered

by the COVID-19 Pandemic and Vikander’s pregnancy.