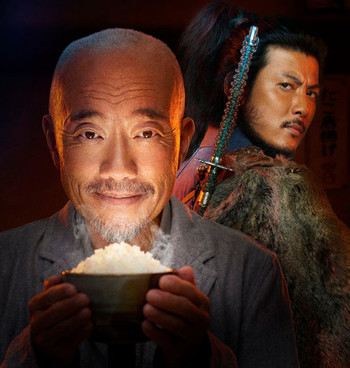 "This man is not a wandering samurai of today."
After retiring, he lost his title as a corporate employee and the support of his company.
Takeshi Kasumi, 60 years old.
This story is about a normal 60-year-old man who is helped by a masterless samurai, eating freely without being held back.
A gourmet fantasy.
— Opening narration
Advertisement:

Samurai Gourmet (Nobushi no Gurume) is a 2017 Netflix original series based on a Manga by Masayuki Kusumi and Shigeru Tsuchiyama. Takeshi Kasumi is a newly-retired 60-year-old Salaryman, and the series follows his modest efforts to fill his free time with enjoyment. Enjoyment almost always comes in the form of food, but the other thing Kasumi is passionate about is Warring States Era Samurai stories. Whenever he encounters an obstacle to his happiness, his daydreams of a nameless Rōnin teach him how a real samurai would handle things.