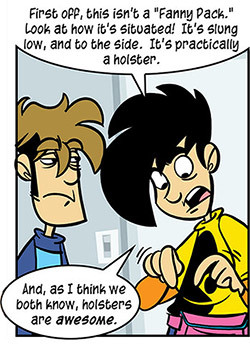 Alan: It's not a purse. It's a satchel.
Chow: Is a purse, and you steal it from wrong guy!
— The Hangover
Advertisement:

A joke, especially in Sit Coms, wherein a character consistently refers to something embarrassing by what they hope is a more dignified name.

A more specific form of Insistent Terminology. See also Unusual Euphemism when very unpleasant things are concerned. Real Men Wear Pink is the standard subversion. A character may use this to try to cover up an Unmanly Secret.

Action Figure Justification is related, for when toys are insistently referred to as action figures rather than dolls (despite the actual difference being the two being rather superficial and along gender lines). For instances where an evildoer insists on a more 'civil' description of his rank villainy, see "Blackmail" Is Such an Ugly Word.

Alternative Title(s): The European Carry All