Music / The Sisters of Mercy 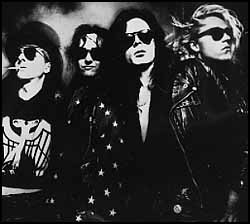 The Sisters of Mercy are a rock band formed in Leeds, England in 1977 when guitarist Gary Marx and then drummer Andrew Eldritch "just wanted to hear themselves on the radio." Widely regarded as Goth Rock by their fans, but Eldritch denounced this label himself, preferring to call The Sisters an "Industrial Groove Machine."

The band's lineup is ever-changing, with the exception of Andrew Eldritch (vocals, guitar, keyboards) and Doktor Avalanche (a drum machine). Past members include but are not limited to: Ben Gunn (who left to play in a band called Torch in 1983), Gary Marx (who left to form Ghost Dance in 1985), Wayne Hussey and Craig Adams (who left to form The Mission in the same year), Patricia Morrison (who left after Andrew didn't pay her for playing on Floodland), Tony James (ex-Generation X and Sigue Sigue Sputnik, who left after Vision Thing).

They were on a hiatus between 1993-1996, and they've been back together ever since. People don't seem to know this, however, because Andrew Eldritch refuses to release any of the new material he's written and recorded in the past 17 years — enough new songs to fill a couple of albums. They still tour frequently though, for what it's worth, and play these new songs live often.

You could also count Gift, which was released under the pseudonym "The Sisterhood" in 1985 by Eldritch, Morrison, Avalanche, Lucas Fox, James Ray, and Alan Vega in the midst of the legal dispute between Eldritch on the one side and Hussey and Adams on the other. The album secured Eldritch's legal right to continue as The Sisters of Mercy while Hussey and Adams were forced to rename their band to "The Mission" ("The Mission UK" in the US, as there had been another band with that name).

Somewhat more importantly, they also have Some Girls Wander by Mistake, a compilation of (most) of the singles and EPs they released during the early '80s before they actually had a recording contract. It contains many of their best (and a few of their worst, and they'll tell you that) songs. None of these albums sounds anything like each other, except for Eldritch's Darth Vader ish vocal style. Some Girls was about icy, mechanical drum machine beats coupled with deep bass and high end, minimal guitar riffs ("Alice" is notable because... Well, because it's awesome, but also because the riff is almost always mistaken for AC/DC's "Thunderstruck" from 8 years later. The riffs are both one string wonders using the same string). Note that Eldritch plays the drums quite horrendously on "The Damage Done," although most of the other stuff on the album use a drum machine. Most of the Sisters' imitators (and they have many) tend to use the early Some Girls Wander by Mistake stuff as their template.

First and Last and Always was made at a tumultuous time in the band's career, which involved Andrew Eldritch out of his mind on amphetamines for large chunks of the sessions, stringing himself out until he had to be hospitalised, heaps of material being left by the wayside (some of it later reworked by Marx and Hussey to be used in Ghost Dance and The Mission respectively), and culminated in guitarist Gary Marx leaving the band in a huff around the time of the album's release. For this album, they tried for a warmer sound with more sophisticated guitar pop and less challenging lyrics. It's also the most stereotypically gothic of the releases and has a large cult following for it.

Floodland, produced when the band was reduced to Andrew Eldritch, a drum machine, the New York Choral Society, and whoever else was around (Patricia Morrison on bass and a session guitarist for "This Corrosion"), is heavily synthesized, lushly (and bombastically) produced, and can be summed up as "industrial gothspel." It's also the one that depends most on Eldritch being a singer and a lyricist. It's their best selling album.

Vision Thing is a fairly straight (except maybe for "Ribbons") guitar rock album with a political bent that tends to split fans down the middle. It's currently the band's last studio release (barring two new-ish tracks on the compilation album A Slight Case of Overbombing and the gag album Go Figure submitted in '97 under the name SSV to escape a record contract, but never released) after Eldritch started arguing with his record label. This means their last studio album was released in 1990 and their last released studio recording came out in 1992, but the band has kept on trucking on and off since then, still primarily centred around Eldritch and Doktor Avalanche.

Oddly enough, the most depressing song they've ever done was a Hot Chocolate coverNote If you're wondering, the song in question is "Emma", which, being about a girl who kills herself because she can't achieve her dreams, was pretty damn depressing to start with.