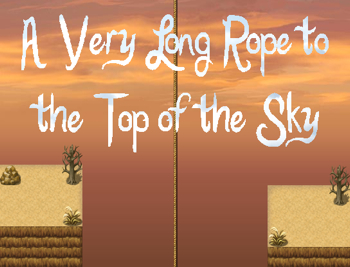 Look at this one, Ivy.
This is a very special plant—
a plant that aches, that loves.
It's called a "Mourning Vine."

Do you see it, daughter?
See the pretty flowers?
See how every bud is
connected on the vine?

If I clip one,
I can press it in this book,
and it will be
beautiful forever...

but all the other flowers
will wither when it's gone.
Advertisement:

A Very Long Rope to the Top of the Sky is a freeware Eastern RPG by Housekeeping, created for PC in 2013. It is set in an original, and generally coherent, universe with a relatively rich history, both ancient and modern. The game uses RPG Maker VX as its engine, but makes use of an entirely original soundtrack.

The plot starts with Ivy and Mint, two sisters (ages 14 and 12, respectively) who have grown up in a harsh environment inside a massive, barren chasm. The only person they know, besides themselves, is their father Gram, and Gram has just died a day ago. Ivy and Mint are left to fend for themselves as best they can, but they very quickly discover that the world they inhabit is not the world they thought they inhabited, and the plot twists only get more convoluted from there.

On June 29th 2015, there was a Major Update to make the game less tedious. Download here.