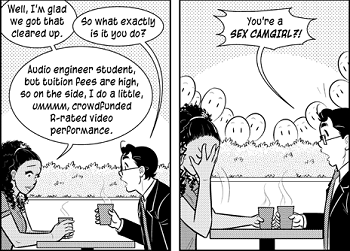 Thank you very much.
"General Heydrich, I have the real feeling I "evacuated" 30,000 Jews already by shooting them in Riga. Is what I did "evacuation"? When they fell, were they "evacuated"? There are another 20,000 awaiting similar "evacuation". I find it useful to know what words mean."
— SS-Sturmbannführer Rudolf Lange, Conspiracy (2001)
Advertisement:

Someone uses a euphemism, Last-Second Word Swap or something similar, and someone else blurts out exactly what the first person meant.

It generally comes in two versions: Ditz and Intentional. The Ditz version is just the person figuring it out for themself without realizing that the speaker was trying to be discreet. The intentional version occurs when a character simply doesn't care about the delicacy of the matter and prefers getting the point across with Brutal Honesty, or just deliberately disregards it to be obnoxious about it; if the person the speaker is talking to simply doesn't understand what they're trying to say, it may lead to the former having to bust their own euphemism just so the latter can get the message.

The euphemism may or may not be unusual or deadly. Compare and contrast Lampshaded Double Entendre (in which the person who speaks Double Entendre actually means innocent things until someone mistakes it as something that isn't innocent), Don't Explain the Joke, Fee Fi Faux Pas.