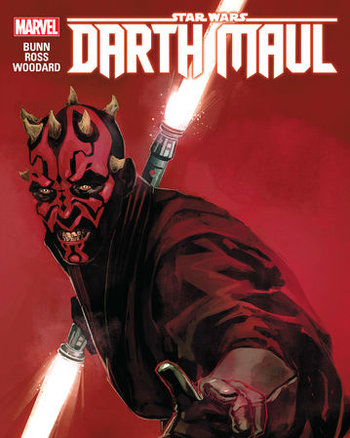 In the shadows, an ancient enemy stirs. The Sith
-practitioners of the dark side of the Force long
thought destroyed - secretly work to undermine
and eventually overthrow the Jedi Order, the
guardians of peace and justice in the galaxy.

Two members of the Sith order - Darth Sidious
and his apprentice Darth Maul - secretly await
their moment to strike. But while Sidious plans
an intricate series of deceptions and
machinations, Maul grows restless.

The moment of revenge is close at hand, and he is
unwilling to wait much longer...
Advertisement:

Darth Maul is a 2017 Star Wars Expanded Universe limited comic series written by Cullen Bunn and illustrated by Luke Ross. It serves as a prequel to The Phantom Menace.

Shortly before the invasion of Naboo, a young Darth Maul grows frustrated and impatient with maintaining concealment from the Jedi, per orders of his master, Darth Sidious. To vent his anger, he tests his anger against creatures and cutthroats throughout the Galaxy. However, during one mission, he is one of the few to learn that a powerful crime lord has captured a young Jedi Padawan. Seeing this as an opportunity to test his mettle, he sets out to seek this Jedi, secretly defying his master's wishes.

Not to be confused with the non-canonical Legends comic series released in 2000 by Dark Horse Comics. Darth Maul: Son of Dathomir was also published under Dark Horse, but as an adaptation of an unreleased arc of Star Wars: The Clone Wars. It is canonical to the Expanded Universe under Disney and Marvel's publishing.