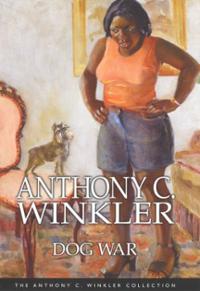 What possible trouble could such a small dog give to such a big woman like her?
Advertisement:

Dog War is a novel by Jamaican author Anthony Winkler, published in 2006.

Precious Higginson, a mature Christian woman who's recently been widowed following her husband Theophilus's death in a car accident, accepts her daughter Shirley's invitation to come and live with her and her family in America. The invitation comes after Precious, who's been living with her other child Harold for some time following Theo's funeral, has repeatedly had personality clashes with Harold's wife Mildred over housekeeping and child-rearing techniques.

Once she arrives in America, however, Precious finds herself facing severe culture shock, as the activities and mindsets that Americans take for granted are sharply at odds with her own Jamaican personality and Christian beliefs. The culture shock is not helped by Shirley's independent-female attitude and the rather effeminate activities of her husband Henry.

In an effort to stave off boredom, give herself something useful to do, and be able to live her own way peacefully, Precious takes up a job offer to work at the mansion of a wealthy woman, Mistress Lucy, as a live-in maid. However, hilarity ensues when she discovers that her specific job will entail caring for the woman's dog, Riccardo, who gets treated like a human being and happens to be rather perverted toward her...

Examples of tropes in this work include: