Literature / Does My Head Look Big in This? 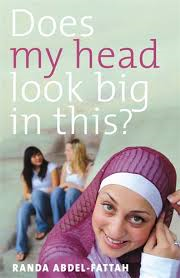 Does My Head Look Big in This? is a novel by the Muslim-Australian author Randa Abdel-Fattah. The plot revolves around a sixteen-year-old Muslim Australian Palestinian girl, Amal, and her decision to wear the hijab, the traditional Islamic headscarf, and the reactions of her friends and family.