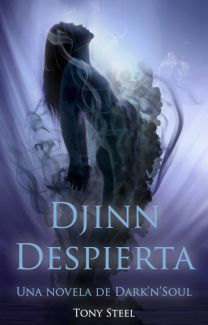 The Djinn has awoken.
Djinn Awakes is a Web Serial Novel previously published in Wattpad (link now unavailable due to its participation on an editorial contest). It’s sequel, Alliance of Steel, is being published (almost) weekly.
Advertisement:

Gina Serna is a Spanish seventeen years old girl, a drop-out from high school who tries to find a work to sustain herself and her good-for-nothing father. One morning, though, a Tall, Dark, and Handsome stranger named Alyosha breaks gently into her flat, treats her to breakfast cereal, and tells her she has been sold by her father, and to come to see him whenever she wants some answers. A bodyguard, Lorca, will be placed next to her to protect and prepare her for what’s to come.

And then hell breaks loose and the Djinn awakes; a powerful, malevolent entity who empowers Gina with the strenght of every human life she takes. Gina is now the Djinn, or at least its wielder, and has become an Alter, one of the inhabitants of the supernatural society called the Otherworld.

First novel from the Dark’n’Soul series, written by Tony Steel, also a troper. The second novel, Alliance of Steel, is being written [1]

. There is also a role-playing game in the works [2]