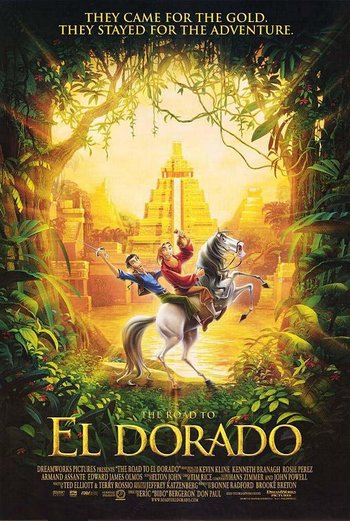 We're the greatest! We... we won! Hurrah for us! Right?
Advertisement:

A traditionally-animated 2000 film by DreamWorks Animation, The Road to El Dorado, follows the adventures of Spaniards Tulio (voiced by Kevin Kline) and Miguel (voiced by Kenneth Branagh) as they try to con and cheat their way to fame and fortune during the Spanish Conquest of México. A game of chance earns them a Treasure Map which seems to point the way to El Dorado: the lost "City of Gold." The two men stow away by accident on the Hernan Cortéz's flagship, and their escape strands them in the New World with only Cortéz's horse and the treasure map for company. Seeking enough gold to "buy Spain", they set off into the jungles of Central America, where they'll find something worth much more than treasure.

Only the second traditionally animated feature-length offering from DreamWorks, after The Prince of Egypt. The studio may have been hoping to rival the success Disney had enjoyed with the Renaissance of the 1990s. Unfortunately the film failed to equal Prince of Egypt commercially and critically, and DreamWorks, after releasing the Direct to Video Joseph: King of Dreams and the theater-released (but barely advertised) Spirit: Stallion of the Cimarron and Sinbad: Legend of the Seven Seas, thereafter wholeheartedly embraced computer animation.

According to the producers, after seeing so many animated features whose heroes were upstaged by more memorable sidekicks, they decided to just cut out the typical "hero" characters and center the film on Those Two Guys in the first place. With the plot of The Man Who Would Be King. With songs by Elton John, reunited with lyricist Tim Rice and composer Hans Zimmer after all three had worked on another little animated movie.

As might be expected from the title and the two con-artists traveling plotline, the film is heavily influenced by the Bing Crosby, Bob Hope, and Dorothy Lamour series of Road to ... films of the 1940s.

Example of:
Kissing the Ground