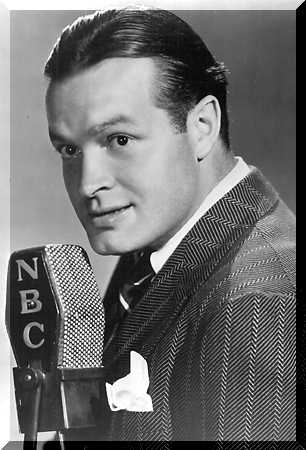 (Rocky's opponent, wrestling champion Thunderlips, enters the arena.)
Mickey: Let's call it off.
Rocky: Aw c'mon, it's for charity.
Mickey: You're wearing your anatomy out for charity! Nobody else does this much for charity!
Rocky: Bob Hope would.
Mickey: ...That's true.
— Rocky III
Advertisement:

Leslie Townes "Bob" Hope KBE (May 29, 1903 – July 27, 2003) was a British-born American comedian and actor who appeared in vaudeville, films, television and radio. He also hosted the Academy Awards Ceremonies 18 times, and toured for the USO to entertain U.S. military troops in multiple wars, from World War II to The Gulf War; in 1996 he was declared the "first and only honorary veteran of the U.S. armed forces" by Congress.

His best-known films are the Road to ... series, in which he co-starred with Bing Crosby and Dorothy Lamour, and the Film Noir parody My Favorite Brunette, also with Lamour. For many years his stand-up material was written by his good friend Bob Monkhouse, a stand-up comedian in his own right.

He was also a minority owner of Major League Baseball's Cleveland Guardians (known as the Indians in his day) for much of his life.note The new team name has a roundabout connection to him. The "Guardians" name comes from the Guardians of Traffic, sculptures on the pylons of the Hope Memorial Bridge that crosses the Cuyahoga River near the Guardians' ballpark. Depending on the source, the bridge was named for Hope's father (a stonemason), either by himself or as representative of all the stonemasons who worked on the bridge; Hope himself; or the Hope family.

Hope was married twice. The first marriage, to his vaudeville partner Grace Troxell, lasted less than two years; the second, to singer Dolores Reade, lasted nearly seventy years until his death from pneumonia at age 100. They had four adopted children.

Tropes associated with Bob Hope include: