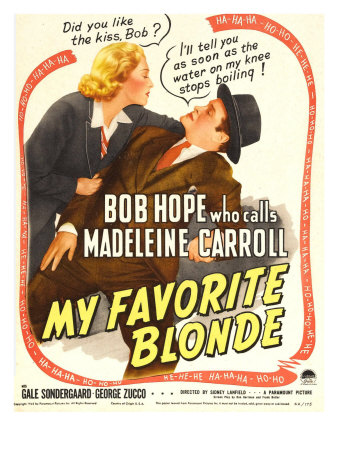 Karen Bentley (Carroll) is a British secret agent carrying a scorpion stickpin that contains classified information on the planned route for a flight of Lockheed bombers from America to Britain. Nazi agents are trying to kill her almost as soon as she steps off the boat in New York, and while Karen is on the run, she stumbles into a vaudeville theater and the dressing room for Larry Haines (Hope), a comedian who has a stage act starring himself and his trained penguin, Percy. Karen ropes Larry into helping her, and romance and comedy ensue as they travel cross-country to Los Angeles with the classified info, murderous Nazi agents in pursuit.

Bob Hope had been raving about Madeleine Carroll on his radio show ever since seeing her in Alfred Hitchcock's The 39 Steps in 1935. Thus it was only appropriate that after Carroll came to Hollywood, she would co-star with Hope. In fact, this film is basically a comedic remake of Hitchcock's version of The 39 Steps. The popularity of this movie led Hope to star in similar comic spy films, My Favorite Brunette and My Favorite Spy.