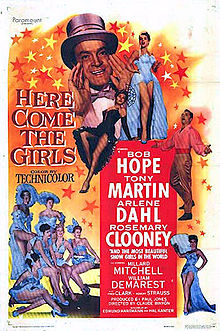 That's the name of the play the movie's about. It's not actually a romance.

Here Come the Girls is a 1953 musical/comedy film about klutzy Broadway actor Stanley Snodgrass (Bob Hope) who never enters a play that he doesn't screw up. After being fired for the last time, though, he's called back into action one last time — jealous serial killer Jack the Slasher (Robert Strauss) is after anyone who gets in the way of his and costar Irene Bailey's (Arlene Dahl)... "relationship", and Stanley's asked to play the lead role alongside her... as bait.