Film / The Greatest Show on Earth 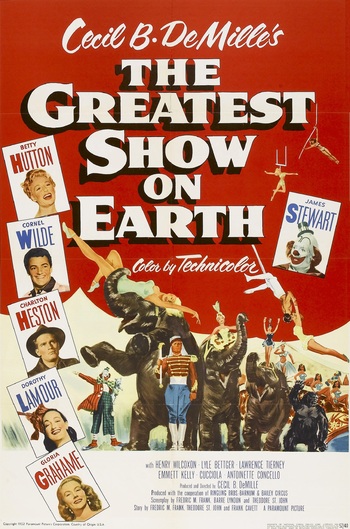 The Greatest Show on Earth is a 1952 film focused on a dramatized depiction of the Ringling Bros. and Barnum & Bailey Circus, starring Betty Hutton, Cornel Wilde, and Charlton Heston, along with Cecil B. DeMille as the narrator, director, and producer. James Stewart, Gloria Grahame, and Dorothy Lamour also had roles, and to top this off, the 1951 troupe of the actual Ringling Bros. and Barnum & Bailey's Circus' filled in as the rest of the circus.

The plot deals with circus manager Brad Braden (played by Heston) dealing with a number of issues facing the upcoming circus season, including dealing with the too-stingy board of directors, as well as a number of problematic circus "divas" with their own issues. Meanwhile, the past of a strange clown who refuses to remove their makeup is about to catch up with the circus as a whole...

Taking inflation into account, the film's box office is among the highest-grossing films in the United States and Canada. It won two Academy Awards (Best Picture and Best Story), and was nominated for three others. It's also notable for being the very first feature film Steven Spielberg ever saw.

A television series of the same name (produced by Desilu Studios when it was a separate entity from Paramount, which produced the film), with Jack Palance in the lead role, aired on ABC for a single season (1963–64) of 30 episodes.