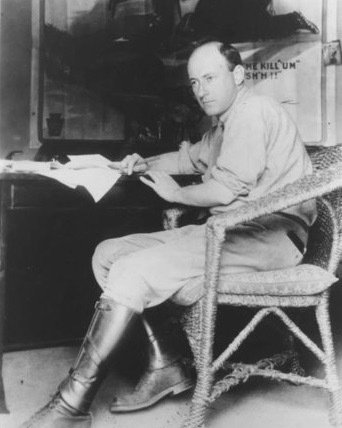 "All right, Mr. DeMille, I'm ready for my close-up."
"Well, it got so that every piss-ant prairie punk who thought he could shoot a gun would ride into town to try out the Waco Kid. I must have killed more men than Cecil B. DeMille."
— The Waco Kid, Blazing Saddles
Advertisement:

Cecil Blount DeMille (August 12, 1881 — January 21, 1959) was an American filmmaker during The Golden Age of Hollywood, whose name has become synonymous with extravagant Epic Movies.

His best-known production, the 1956 version of The Ten Commandments (a remake of his own 1923 silent film) that made a star out of Charlton Heston, illustrates the film qualities DeMille is famous for. Massive sets, extras by the thousands and scenes guaranteed to leave audiences' jaws on the floor. To this day, Moses' parting of the Red Sea remains an incredible piece of cinematography. Charlton Heston later wrote of DeMille in his autobiography In The Arena: "I should have thanked him for my career."

Considered the poster boy for tyrannical directors (a reputation that was rather blown out of proportion when in truth DeMille was nowhere near as bad as someone like David Lean), DeMille, who saw himself as a responsible father or teacher presiding over a household when it came to the cast and crew of his films and saw everyone as his "children" or students who had certain "chores" they had to do, did not tolerate fools gladly and despised actors who weren't willing to take risks for their art, as was the case with leading man Victor Mature on 1949's Samson and Delilah. Despite his large, burly physique Mature was revealed to be a man of many fears and phobias - not only did he refuse to wrestle a perfectly tame, toothless lion, he also ran away when a giant wind fan malfunctioned during the scene where Samson killed the Philistine army with "the jawbone of an ass" (donkey) and hid in his dressing room, cowering in fear. This angered DeMille so much that he got on his speaker phone and declared to the entire cast and crew that Mature was "100% yellow."

Not considered a great director of actors, DeMille excelled at directing and coordinating large crowds of extras during epic scenes while he relied on an unofficial stock company of actors, such as long time collaborator Henry Wilcoxon, who knew how to give him what he wanted without needing much guidance.

The cartoon image of a movie director (guy in a beret, sunglasses and riding boots, carrying a cigar or riding crop in one hand and a megaphone in the other, e.g. the director in the 2007 Ballet Shoes) was originally a reference to DeMille's odd taste in work clothes. The monocle also sometimes depicted was an affectation of both Fritz Lang (who also smoked with a cigarette-holder) and Erich von Stroheim, but not DeMille.

DeMille had a particular taste for costume design, and was called upon to design the U.S. Air Force Academy's cadet uniforms. The design is still used.

He appeared As Himself in several Paramount films: Star Spangled Rhythm, Variety Girl, Sunset Boulevard and The Buster Keaton Story. For several years he moonlighted as the producer and on-air host of the Lux Radio Theatre show.

Today his name is invoked whenever anyone refers to a motion picture whose production values go way over the top.

He was also one of the first directors to mix religion and eroticism in his movies. He would display sensational scenes of debauchery and then punish the perpetrators in order to have them pay for their sins.