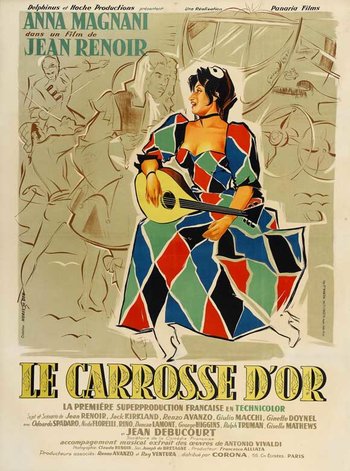 The Golden Coach is a 1952 film by Jean Renoir.

The film, which unlike most of Renoir's films is in English, is set in 18th century Peru during the Spanish colonial period. Ferdinand, the viceroy of the colony, has just ordered an ornate golden coach from Europe. The nobles of the colony are rather put out at Ferdinand using state funds for such extravagance, but Ferdinand somewhat disingenuously claims that the coach is for the office of the viceroy to build imperial prestige.

Also on the same boat to Peru is an Italian theater troupe. The theater troupe builds a stage and starts giving performances. Starring in the troupe is Camilla (Anna Magnani), a fiery, hot tempered actress and near-literal Drama Queen. She is accompanied by Felipe, who seemingly only came with the troupe because he wants Camilla to marry him. That's complicated however when Ferdinand, who himself has a mistress, falls in love with Camilla and tries to win her. And that's further complicated when Ramon, a bullfighter and the local celebrity, also falls in love with Camilla. Meanwhile, the nobles of the colony, who aren't thrilled with their viceroy cavorting with a low-class actress, plot a palace coup.