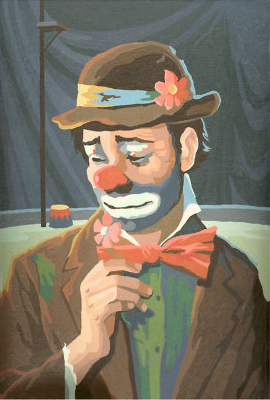 "Oh, this...this is beautiful."
Heard joke once: Man goes to doctor. Says he's depressed. Says life seems harsh and cruel. Says he feels all alone in a threatening world where what lies ahead is vague and uncertain. Doctor says, "Treatment is simple. Great clown Pagliacci is in town tonight. Go and see him. That should pick you up." Man bursts into tears. Says "But, Doctor... I am Pagliacci." Good joke. Everybody laugh. Roll on snare drum. Curtains.
— Rorschach, Watchmen
Advertisement:

Often found among troops and superhero teams, the Sad Clown is the wisecracking funnyman who copes with his hopeless position with humor — usually of the groan-inducing kind. He is totally insecure at heart and keeps on running his mouth to fool himself into thinking he's confident or to get people to like him.

In the most tragic cases though, people do actually find them genuinely charming and likable because of their humor and like being around them. This is usually of little comfort to the Sad Clowns, whose insecurities cause them to fear that people only really like the "Clown" part of them, and so they do their damnedest to always be the "Clown" in public, but bury and suppress the "Sad" side of them as deeply as possible, because they are afraid that people would like them less if they were to find out about it.

This character tends to make Dude, Not Funny! jokes at inappropriate times to cope. But he is never deliberately a Monster Clown.

Often put in more serious series to add some comic relief, while at the same time secretly revealing to the audience that the character is a simmering pot of hidden insecurities and angst, just like everyone else in the cast.

Contrast Non-Ironic Clown. See also Gallows Humor which is often used about a grim subject whenever someone wants to lighten up the mood, Hurting Hero with heroes who suffer and deal with it in various ways, Broken Hero, Inferiority Superiority Complex about people who mask their insecurities by acting self-assured in order to gain confidence, Stepford Smiler who pretend that they are happy with their lives often to themselves first and foremost and don't necessarily use humour, Stepford Snarker who has a lot of similarities but is more usually bitter at others and his remarks are generally more cutting, Sour Outside, Sad Inside when the character masks their inner trauma with cynicism and snark rather than humor, The Unwitting Comedian, who doesn't even bother hiding their sadness but is seen as a straightforward jokester anyway, The Comically Serious, where a character gets put in comedic situations but forces themself to be serious, and Dreaded Kids' Party Entertainer Job, when someone who performs for kids' parties is abused, which may make them depressed or anxious.

open/close all folders
Art
Anime & Manga
Comic Books
Fan Works
Films — Animation
Films — Live-Action
Jokes
Literature
Live-Action TV
Music
Dear Mister Fantasy play us a tune
Something to make us all happy
Do anything take us out of this gloom
Sing a song, play guitar, make it snappy
You are the one who can make us all laugh
But doing that you break out in tears
Please don't be sad if it was a straight mind you had
We wouldn't have known you all these years
Radio
Roleplay
Theatre
Video Games
Visual Novels
Web Animation
Webcomics
Web Original
Web Videos
Western Animation
Real Life
Feedback

When Rodney calls out Del for drinking and partying instead of mourning Grandad, Del admits he has trouble grieving and expressing his real feelings.

When Rodney calls out Del for drinking and partying instead of mourning Grandad, Del admits he has trouble grieving and expressing his real feelings.