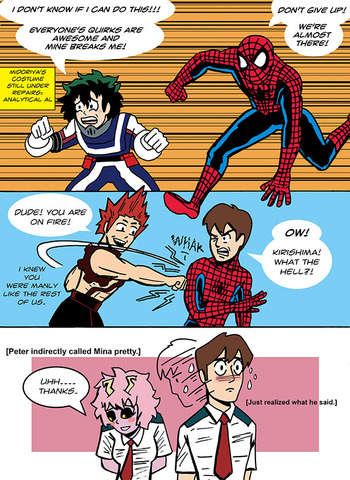 Peter Parker: Foreign Exchange Student is a My Hero Academia and Spider-Man Crossover Fan Webcomic drawn by AlexDrawsAgain on Tumblr. There is little continuity between individual posts, as the author draws and posts what he pleases, but there's still a running underlying mythos mainly filled out through answers to his ask section.

It follows the misadventures of Peter Parker, who is attending U.A. High School, one of the finest hero schools in the world, as a Foreign Exchange Student after his identity as the vigilante Spider-Man was outed to the public. There he struggles to keep up with schoolwork, combat exercises, his unshakable guilt for his Uncle Ben's death, and his hormones acting up around every hot girl around him. Oh, and going out of his way to piss off one Katsuki Bakugou at every opportunity.

The artist began drawing the comic in December 2018, posting semi-frequently as his personal interest and time allows. It can be read on his Tumblr account here.

It can also be read on his DeviantArt page.

Not to be confused with Friendly Foreign Exchange Student Spider Man, which focuses on the MCU version of Peter. The artist is a fan of it though.