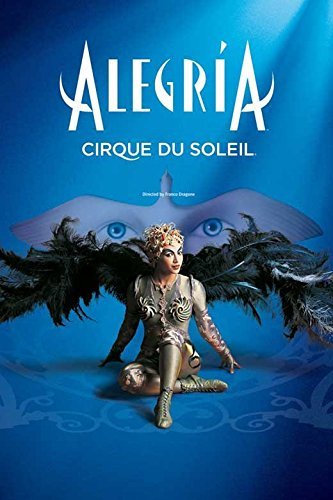 There is a love in me raging, Alegria
A joyous, magical feeling
The title song.
Advertisement:

Alegria is the eighth Cirque du Soleil production, the original staging of which launched in 1994 — and ran until the end of 2013 — as the company's 10th anniversary tour. The title is a Spanish word meaning "joy despite great sorrow", commonly used at funerals. Notable acrobatic segments include synchronized trapeze, manipulation, a fire-knife dance, fast track, and Russian bars.

The All There in the Manual backstory: A kingdom has lost its ruler; there is no heir. Power is up for grabs, and it comes down to a struggle between the old order of pampered, selfish nobles (led by the sinister jester/emcee Fleur) and a new one of loving, giving youths.

The most seriously-themed show Cirque had mounted up to that point but (as ever) not without hope, it cemented the company's popularity and acclaim. Its soundtrack remains their biggest seller to date. It mostly toured as a tent show from 1994-2009, but for a two year period (1999-2000) it performed as a resident show at the Beau Rivage casino in Biloxi, Mississippi (owner Steve Wynn had hoped it would be the sensation that Mystere had been in Las Vegas). In mid-2009, it relaunched as an arena show and toured through 2013.

In 2018, the show was revived as a tent tour to mark its 25th anniversary.

In 1998, writer-director Franco Dragone (via a screenplay by Rudy Barichello) helmed a dramatic film of the same title, which incorporates the live show, its characters, and themes into a larger story. The protagonists are a street mime, Frac, and his urchin friend Momo — the former is grieving over a lost love; the latter is one of many unwanted children forced into the employ of the cruel Marcello, who forces them to tend and sell roses for him. One night Frac attempts to commit suicide by lying on railroad tracks as a train approaches — he is only stopped from doing so when Momo joins him with the same intent. The train comes to a halt and as the circus performers who were on it emerge to find out what happened, Frac falls in Love at First Sight with their beautiful singer, who is also the daughter of the boss/Fleur performer (played by Frank Langella). The feeling is mutual, and from here Frac tries to find a way to woo her — and learn her name! — despite her father's misgivings; this eventually converges with Momo's struggle to liberate himself and the other children. The film was an independent effort that didn't get much theatrical distribution (just Canada and a few European countries) and is largely unmentioned by Cirque itself or its fanbase, but warranted a DVD release.

The actual show was filmed during its Sydney, Australia engagement in 2001 and subsequently given a DVD release.

The movie it inspired also contains examples of: