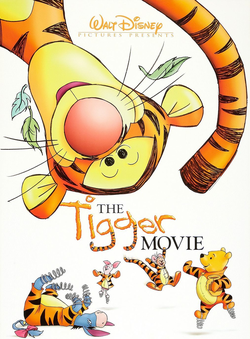 The Tigger Movie is a 2000 Disney animated feature starring characters from the Winnie-the-Pooh franchise, mostly centered around Tigger and Roo.

Here, Tigger feels lonely about being "the only one" and decides to search for a tigger "family" with Roo's help. But when things get out of hand, will the others be able to show Tigger who his real family is?

This film is notable for being Pooh's first theatrical endeavor since 1983's Winnie the Pooh and a Day For Eeyore, and the first Disney film to feature songs by The Sherman Brothers since Bedknobs and Broomsticks in 1971.

Tigger realizes his friends were a true family to him all along.

Example of:
It Was with You All Along

Tigger realizes his friends were a true family to him all along.