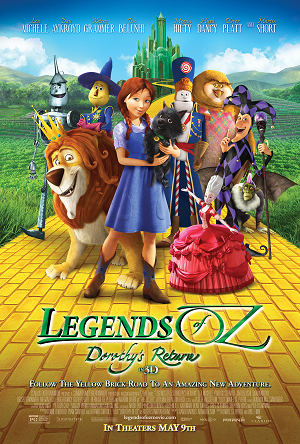 Legends of Oz: Dorothy's Return is a 2014 3D computer-animated musical film based on The Wonderful Wizard of Oz by L. Frank Baum, and the book Dorothy of Oz by his great-grandson, Roger Stanton Baum. It was produced by Summertime Entertainment (the family entertainment division of Alpine Pictures), directed by Daniel St. Pierre and Will Finn, and starred Lea Michele, Dan Aykroyd, Kelsey Grammer, Jim Belushi, Megan Hilty, Hugh Dancy, Oliver Platt, BRIAN BLESSED, Patrick Stewart, Bernadette Peters, Tom Kenny, and Martin Short. The film was released in the US and Canada on May 9, 2014.

Dorothy Gale returns to Kansas to find it devastated, and then finds a new way to get back to the Land of Oz, only to discover that her old friends - the Scarecrow, Tin Man, Cowardly Lion - and the entire Land of Oz are all in grave danger. On Dorothy's new journey through Oz, she meets new friends like a china doll princess, a marshmallow man named Marshal Mallow, a large owl named Wiser, and an ancient tree-turned-tugboat named Tugg. With the help of her new friends, they band together against a wicked Jester who wants to control Oz by turning important people into marionettes.

It was also preceded in 2013 by a prequel comic.

Not to be confused with Return to Oz.

The Jester sings a circus-themed villain song while making the puppetified rulers of Oz dance against their will. Fun!

The Jester sings a circus-themed villain song while making the puppetified rulers of Oz dance against their will. Fun!