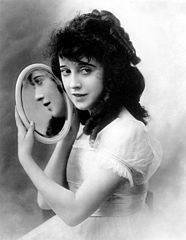 Mabel Ethelreid Normand (November 9, 1892note Her gravestone states "1895" however this is incorrect – February 23, 1930) was both one of silent film's earliest leading ladies and one of the pioneer women of comedy. She was the Trope Maker for Slapstick Knows No Gender.

Born in Staten Island, NY, Mabel Normand was independent, athletic, and adventurous from a young age. In 1908 she got her first job as a dress model for a magazine. By 1909, however, she had moved on to working as a film extra. Despite the fact that bit roles in movies paid more than her previous job as a model, Normand's mother disapproved of this change of career and made her daughter go back to modeling. A few years later, Normand was coaxed back into film by her aspiring director boyfriend Mack Sennett. After her boyfriend fled to Hollywood, she continued her career in New York. In 1912, Sennett came back and took her with him to Hollywood, where Normand's career truly began to skyrocket.

Starring in over 160 short films and over 60 feature-length films, Normand was a prolific actress who mainly worked with Keystone Studios. She often co-starred with other comedic greats, such as Fatty Arbuckle and Charlie Chaplin.

Normand also worked as a director, screenwriter, and producer. The first movie she directed, Mickey, was stuck in limbo for two years. However, Normand used this time to heavily market the film, which led to it becoming a blockbuster hit.

Unfortunately, despite all her accomplishments, Normand's reputation was (and continues to be) haunted by scandal.

In life, she was known a party girl with a drug problem. In 1922, Normand visited William Taylor, a director friend of hers who helped get her into a drug rehab clinic. The next morning, Taylor was found shot in his home. Being the last person to see him alive, rumors began that Normand was somehow involved with his death, with some even claiming that Taylor was Normand's drug-dealer. She was ultimately not charged with the murder and the crime remains unsolved.

On New Years Day 1924, Normand and some of her friends — actress Edna Purviance (Charlie Chaplin's leading lady for eight years) and millionaire Courtland Dines — were out drinking and partying. Normand's chauffeur was told to take her home if she got too drunk, but she refused to do so. After Dines insulted her, Normand's chauffeur (who turned out to be a former convict under a new alias) ended up shooting him dead with Normand's gun. While the charges were ultimately dropped, the scandal ruined her career; she was no longer seen as the bright and innocent comedienne of a few years prior.

If the previous troubles weren't bad enough, after staying in a hospital for an appendectomy, Normand was sued by another patient who said she had committed adultery with her husband. The charges were unfounded, but they further sullied Normand's already terrible reputation. She slapped her accuser with a $500K libel suit, which she ended up losing.

In 1925, Normand went back to her home state and starred in the Broadway musical The Little Mouse. After the play bombed she returned to Hollywood the following year. Despite a new contract, Normand's career never recovered from her scandalous past.

In 1927, Normand's health took a turn for the worse when she contracted pneumonia and was afterwards diagnosed with tuberculosis. She spent her final year in a Los Angeles sanitarium, dying at age 38 of the disease.

She is played by actress Marisa Tomei in the movie, Chaplin.