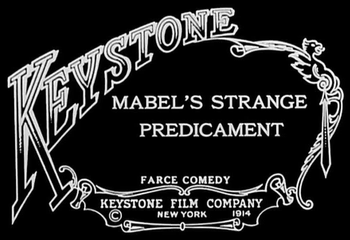 Mabel's Strange Predicament is a 1914 film starring Mabel Normand and Charlie Chaplin, directed by Normand. In this film Mabel is a well-to-do lady (if her fancy dress is any indication) who is staying at a hotel with her fiance. Mabel has also brought along her dog, and when she happens to step outside the door to her hotel room in her pajamas, the dog pushes the door shut, leaving her trapped outside. A panicked Mabel then dives into the opposite room and hides from the occupant, a husband whose wife has gone off to complain about all the noise Mabel has been making.

This ten-minute short, one of hundreds made by Keystone Studios during this era, is remembered today as the first on-screen appearance of Chaplin's iconic character, The Tramp.note For many years that was believed to be Kid Auto Races at Venice, but later research revealed that while that film was shown in theaters first, this one was filmed first. It was the second film for Chaplin, the new hire at Keystone, whose debut film Making a Living had been a disappointment. Versions of the story differ, but apparently Chaplin more or less on the spot invented the character of the Tramp—bowler hat, undersized coat and vest, oversized pants and shoes, and rattan cane. By the end of 1914, Chaplin had appeared in the costume in over 30 films and become a massive star. He would wear that same costume in almost every film he made for the next 22 years.