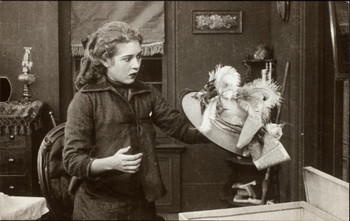 Yep, it's a nice hat
Advertisement:

The New York Hat is a 1912 one-reel film boasting a murderer's row of talent: directed by D. W. Griffith, starring Mary Pickford and Lionel Barrymore, with Lillian Gish in a minor role.

A mother named Mary Harding dies, probably because, as she states in a letter, "My husband worked me to death." That letter is sent to the local clergyman, Reverend Bolton (Barrymore). Mrs. Harding states that her skinflint husband will never buy their daughter Mollie (Pickford) any decent things, so she leaves the reverend with her little cash nest egg, and asks the minister to buy some luxuries for her daughter. The reverend does so, purchasing a fine hat after he sees Mollie admiring it in a department store window. This ill-considered gesture leads to the parishioners gossiping about the nature of the connection between the reverend and pretty young Mollie.