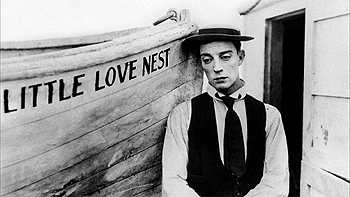 Getting there is half the fun
Advertisement:

In this 1923 short, Buster Keaton decides the best cure for a broken heart is a sailing trip around the world. Hilarity Ensues.

Not to be confused with the 1970s television show The Love Boat.

A version of "The Love Nest" can be seen at Google Video.

note Previously "lost" footage has been edited into the film as it has been discovered, and different home video releases contain different intertitles.

"The Love Nest" contains examples of: