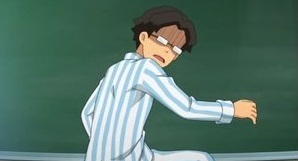 There's nothing more embarrassing than coming to school in your pyjamas.
Stanley: This is... impossible!
Kellaway: Those pajamas are impossible. This actually happened!
— The Mask
Advertisement:

We all know how embarrassing it is to be seen in one's underwear or worse, wearing nothing, but being seen in one's pyjamas can be embarrassing, too. After all, you wouldn't wear your pyjamas out of the house or in front of visitors. This is the trope for when a character is either embarrassed by or ridiculed for their pyjamas, or both.

Maybe it's something about the pyjamas themselves: they might be pink or some other bright color, and/or have something cutesy printed on them like animals, flowers, fairies, etc., which is especially embarrassing if the character wants to be tough, believes the prints on his pyjamas are too childish for his age, is usually too dignified to wear goofy clothes, or is a man/boy and believes the colours/patterns are too "effeminate". It could also be a man wearing a nightie, which he (or the people teasing him) thinks is too similar to a dress or maybe the pyjamas are worn, the wrong size, and/or stained. Maybe the pyjamas have feet attached (called "footie pyjamas") which are almost universally seen as babyish. Maybe the pyjamas are perfectly fine, but just seeing someone in their pyjamas is embarrassing enough.

Similar to Fully-Clothed Nudity if the wearer feels "naked" in his pyjamas despite them covering up all the important bits. Compare Homemade Sweater from Hell; The Glasses Gotta Go; Red Sock Ruins the Laundry (with the implication that pink = ruined); Bad Job, Worse Uniform; Uncool Undies, and Of Corsets Funny for other gawky clothes. See also Pyjama-Clad Hero. If the embarrassing pyjamas were a gift, they're probably an example of My New Gift Is Lame.