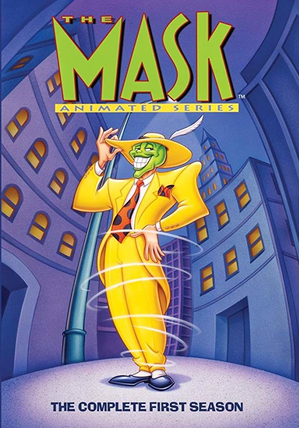 There's one last thing I gotta sing about
Open up wide and really shout, Ohhhhh, look out!
This is The Mask! Smokin'!
Advertisement:

This Animated Adaptation of The Mask lasted for 55 episodes, from 1995 to 1997. It was definitely a product of the film rather than the comic book and took its cues from the Looney Tunes inspired antics of the Mask to make him a real (sort of) cartoon character. This actually allowed the "kids' show" to be in some ways more adult with more subversive antics.

The plot is simple: Stanley Ipkiss, a mild-mannered banker, struggles with the responsibilities of having a mask that transforms the wearer into a nigh-omnipotent trickster. He takes up the superhero thing, but his alter-ego, The Mask, is more interested in simply partying and having fun, which makes Stanley’s life significantly harder (especially his bank account). However, the Mask still manages to save the day from villains like the Mad Scientist Praetorius, the shadow-stealing fairy Skillet, a group of gangsters led by Lonnie the Shark, and many more, since Stanley’s good personality is able to steer him in the right direction.