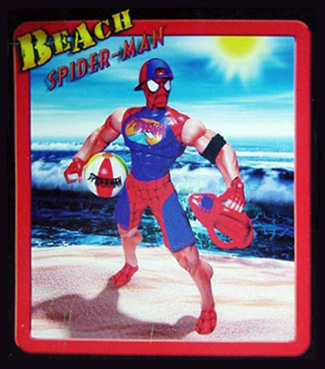 The tendency for toy lines of Merchandise-Driven (and sometimes otherwise) shows to also contain variations of the characters made up out of, er, whole cloth. Most variations fall under Stylish Protection Gear, and virtually every action figure line has at least one of these:

The reason for this is essentially a mixture of retailer demand and cutting costs. Large retailers don't tend to be too familiar with the franchise in question, so they're naturally going to favor toys of Batman over toys of, say, Scarecrow or Poison Ivy, even if fans disagree. Additionally, most of the cost when making a toy goes into producing the steel mold, meaning that molding one or two accessories and changing the color of the plastic is a relative pittance next to creating the molds necessary to design an entire new character. This also serves to keep "main characters" on the shelves longer; after all, if a fan gets into the line a few months later, it wouldn't do for them to find they can't buy the protagonist anymore, and it also wouldn't do to keep shipping identical figures to the toy shop for months or years on end (which would create the impression that the toys aren't selling). Paradoxically, this can create an effect where the character's "standard" outfit is much harder to find than the variants; it almost always comes very early in the line, and will usually be in the highest demand, meaning it tends to sell out quickly.

They did do the research... market research. (And, sometimes, environmental research.)

The longer a figure line continues, the more likely that it'll add some of these variants; after all, as long as the kids keep buying, the toy companies are happy to keep selling. Additionally, these extra designs will almost always go way off color scheme or character concept: it's not unusual to see Batman sporting bright blue, green, red, orange, yellow or pink armor covered in rocket launchers, or to see melee or magic-based characters with assault rifles. Also expect these figures to not make sense within the internal logic of the property, such as the stealth-based Batman in highly-visible gear, The Flash driving around in a racecar or Spider-Man with very lethal and very expensive rocket launchers. Many however can be internally justified by characters who have a habit of making many bespoke costumes, such as Batman or Iron Man.

Some particularly Merchandise-Driven shows will devote whole episodes to introducing these sorts of 'gear', like the snow gear in The Batman (though in this case, the villain that justified its creation and inclusion already existed in the mythos), the new Teenage Mutant Ninja Turtles episode with the backpacks, or just about any Power Rangers episode with the new bike or Super Mode.