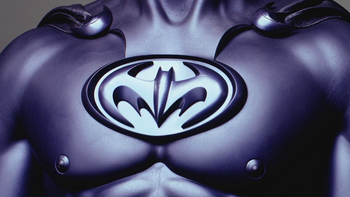 So you're watching a movie, and, hey, maybe it's pretty good. The writing is snappy, the actors really seem to have settled into their roles, and all in all it's shaping up to be an enjoyable experience. And then the hero walks in wearing a gorilla suit, a Fu Manchu moustache, and high heels.

And the thing is, it's not for the sake of a joke. The costuming department thought — mistakenly! — that this combination would make the character look badass, and somehow managed to persuade the director. No, they're not being sarcastic, comical or parodic (at least not at the time): it's an entire team of costume designers being totally, completely 100% damn serious about it. The audience, however, remains unconvinced.

Compare Impossibly Tacky Clothes and I Was Quite a Fashion Victim, which is when characters within the work treat the costumes as bad.