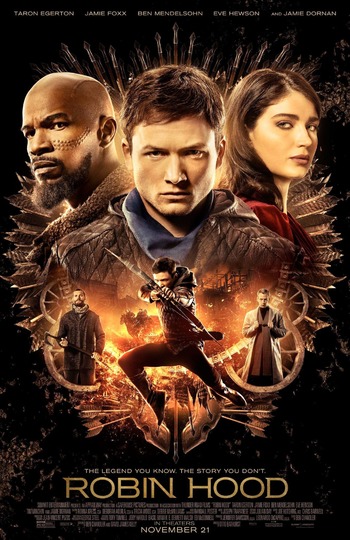 "There's been whispers of a thief."
"You are a Crusader. Now you have to be a warrior. You wanted to steal, now's your time."
— Little John
Advertisement:

Robin Hood is a 2018 swashbuckler film directed by Otto Bathurst (director of Black Mirror: The National Anthem and Peaky Blinders).

Taron Egerton stars as the eponymous character, a war-hardened Crusader with a knack for archery. With the help of Little John (Jamie Foxx) and an outlaw group called the Merry Men, Robin takes it upon himself to take down the corrupt English crown, which claims the Sheriff of Nottingham (Ben Mendelsohn) as one of its enforcers. Jamie Dornan, Tim Minchin and Eve Hewson (Bono's daughter) also star as Will Scarlet, Friar Tuck and Maid Marian respectively.

"A thousand pounds for the man who brings me Hood!"