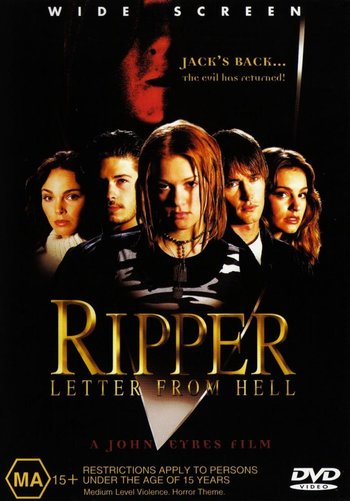 Ripper: Letter from Hell (a.k.a. Ripper) is a 2001 Canadian-British horror film, directed by John Eyres. The film stars A.J. Cook, Bruce Payne, Emmanuelle Vaugier, and Jürgen Prochnow. It was written and produced by John A. Curtis and Evan Tylor and by production companies Prophecy Entertainment and Studio Eight Productions.

A woman finds herself reliving a terrifying moment from her past — only to discover her tormentor's past goes back much further in this horror story. Molly is a college student who, after escaping uninjured from the clutches of a serial killer who claimed the lives of several of her friends, has devoted herself to the study of the murderous mind as a criminology major. While doing research for a class project, she makes the terrifying discovery that the madman who killed her friends is back on the loose — and that his methods and actions bear a striking resemblance to that of Jack the Ripper, the bloodthirsty killer who terrorized London over a century ago.

The film was followed by a 2004 sequel entitled Ripper 2: Letter from Within.