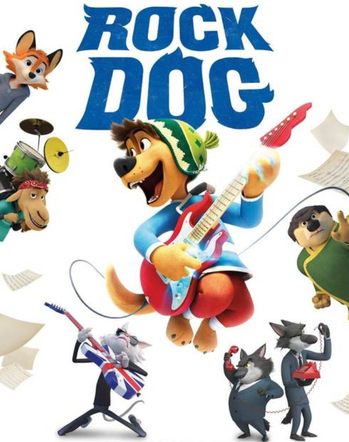 In the isolated Tibetan village of Snow Mountain, a community of fun-loving, scatterbrained sheep divide their time between creating woolen garments and making music. In the Backstory, a pack of wolves once attacked Snow Mountain, but were defeated by the village's protector, a proud mastiff named Khampa (J. K. Simmons). Now, the aging Khampa is training his son Bodi (Luke Wilson) to take over protecting Snow Mountain for him, but Bodi doesn't have the ability — or more importantly, the desire — to do so, especially because his passion is music.

As a result, Khampa promptly decides to ban music from Snow Mountain and lock away every instrument in the village, but everything changes completely when a shipment falls out of a passing cargo plane. The crate includes a radio. When Bodi uses it to tune in a Rock & Roll station from a distant city, he's really hooked—especially after he hears the reclusive feline/British Rock Star Angus Scattergood (Eddie Izzard) being interviewed about his forthcoming single.

Following the advice of wise village elder Fleetwood Yak (Sam Elliott), Khampa reluctantly lets Bodi leave for the city to find his passion, while taking his homemade guitar with him as well. In the unnamed city, Bodi eventually happens to make his way to Rock & Roll Park, the place where many aspiring musicians gather to ply their trade. He ends up meeting, and bonding with, two members of a nameless band, compassionate fox bassist Darma (Mae Whitman) and spacey goat drummer Germur (Jorge Garcia), but arrogant snow leopard guitarist Trey (Matt Dillon) refuses to accept him.

Bodi also tries to seek out Angus, who repeatedly brushes him off until he hears the mastiff playing a catchy original song. Angus has to deliver a new single to his label in a few days, but he's suffering from Writer's Block, so Bodi just might come in handy after all. Meanwhile, Linnux (Lewis Black), the leader of the wolves who managed to besiege Snow Mountain last time, has his henchmen follow Bodi throughout the city in order to kidnap him and force him to disclose Snow Mountain's defenses. Can Bodi escape the wolves and save Snow Mountain, while being able to make his dreams of being a rock 'n' roll star come true?

The film is set to be followed up by two Direct to Video sequels. Rock Dog 2: Rock Around the Park, released in 2021, follows Bodi one year later, when music mogul Lang gives Bodi and his band True Blue the chance to tour with pop sensation Lil' Foxy. Along the way they discover that fame comes at a price, and must learn to stay true to themselves. The third film Rock Dog 3: Battle the Beat follows Bodi attempting to restore his mentor Angus Scattergood's name as a Rock God when a group of young performers on a music contest show admit they have never heard of him.