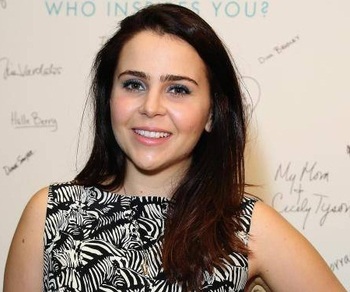 Her?
"Then everything changed when the Fire Nation attacked."
Advertisement:

Mae Margaret Whitman (born June 9, 1988 in Los Angeles, California) is an American actress, born in California to voice artist Pat Musick. Whitman started her career as a toddler — she was discovered after interrupting Musick while the latter was auditioning for a role. She played the daughter of Meg Ryan in When a Man Loves a Woman, President Whitemore's daughter Patricia in Independence Day, George Clooney's daughter in One Fine Day, and Sandra Bullock's daughter in Hope Floats. She also had recurring parts in Chicago Hope and JAG.

Illustrating the tendency of child stars to make the jump to voice acting later in their careers, Mae has done several well-known character voices, beginning with Lil' Suzy in Johnny Bravo.

She replaced Christy Carlson Romano as the voice of Final Fantasy VII's Yuffie. She is also the voice of Agent Xero in The Modifyers, Katara in Avatar: The Last Airbender, Rose in American Dragon: Jake Long, Batgirl in Batman: The Brave and the Bold and DC Super Hero Girls, Wonder Girl on Young Justice (2010), April O' Neill in Teenage Mutant Ninja Turtles (2012), Amity Blight on The Owl House, Becky Bot in Doug Unplugs , and is the first actor to give a voice to Disney's iconic pixie Tinker Bell.

On the live-action side, she is notable for her Recurring Character role as "Ann Veal", The Nondescript girlfriend of George Michael, in Arrested Development.note Which may be a bit of a Casting Gag, since George Michael's other "love interest" is played by Alia Shawkat. Whitman and Shawkat starred in the Fox/ABC Family series State of Grace She also played Mary Elizabeth in The Perks of Being a Wallflower. In addition, she played Roxy Richter in Scott Pilgrim vs. The World where most of her screen time, oddly enough, is spent trying to kill Michael Cera. She's also played the role of Amber Braverman, Troubled, but Cute daughter of Sarah Braverman in the NBC series Parenthood. Lastly, she spent three seasons as Annie Marks, messy little sister of Beth Boland (Christina Hendricks), on Good Girls.

She is pansexual, coming out in August 2021.