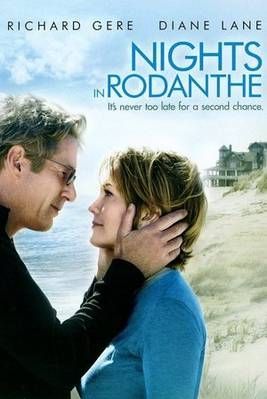 Love is just one storm away.
Nights in Rodanthe is a 2008 Romantic Drama film, based on the novel of the same name by Nicholas Sparks, and starring Diane Lane and Richard Gere, with supporting roles including Christopher Meloni, Viola Davis, Scott Glenn, James Franco (who goes uncredited), and Mae Whitman.
Advertisement:

Adrienne Willis (Lane) has recently separated from unfaithful husband, Jack (Meloni). This leads to estrangement from her teenage daughter, Amanda (Whitman). Her son, Danny, is too young and absorbed in his computer games to know exactly what's going on. While Jack takes their children on a week's vacation, Adrienne decides to go to the Outer Banks of North Carolina, assisting in running the inn that her long-time friend, Jean (Davis), owns.

Meanwhile, in the throes of a mid-life crisis - and guilt over a surgery gone wrong - acclaimed surgeon, Dr. Paul Flanner (Gere), decides to spontaneously visit his son, Mark (Franco), at a remote medical clinic that Mark runs in the Andes Mountains. After abruptly selling his house, and unable to fly out in less than a week, Paul opts to take a room at the same inn as Adrienne.

Together at the inn for a week, with no one else around, the two must face their own demons while slowly getting to know each other. Meanwhile, a hurricane approaches.