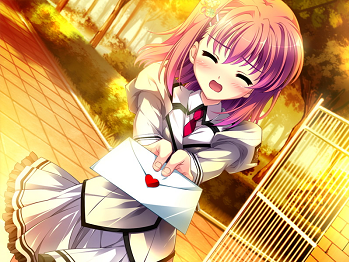 "I write this to you — what more can be said?
What more can I add to that one fact?
For now I know it is in your power
To punish me contemptuously for this act.
But you, keeping for my unhappy lot
Even one drop of sympathy
Will not entirely abandon me."
— Alexander Pushkin, Eugene Onegin, "Tatiana's Letter to Onegin"
Advertisement:

A Love Confession in written form. When characters aren't brave enough to come out and say they like someone, the accepted way around a direct confrontation is a love letter, usually anonymously left in a shoe locker or prominent area, with a request to meet at a predetermined location. The intent is better known than the identity of the person; the letter is often pink, in cute handwriting, and smells like perfume. Bonus with lipstick marks.