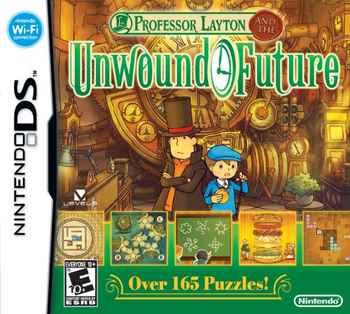 The third game in the Professor Layton Widget Series.
Advertisement:

The first trilogy concludes with Professor Layton and the Unwound Future (Last Time Travel in Japan, Lost Future in PAL regions). One week ago, a demonstration of a time machine went horribly wrong, causing its inventor and the Prime Minister to disappear without a trace. Now the Professor has received a letter postmarked ten years in the future, as that era's Luke asks him for help to undo the chaos that Future London has fallen into.

Please place examples that apply to the series as a whole on the main Professor Layton page.