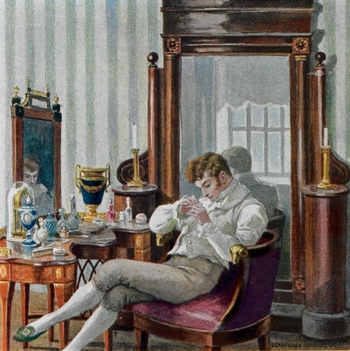 Eugene Onegin is a novel in verse by Alexander Pushkin, generally regarded as the greatest work of Russian poetry. First published in serial form between 1825 and 1832, the first complete edition came out in 1833. The novel has been translated into many languages many times (and new modern translations are being made) and it belongs among the most classic books of Russian literature.

Pushkin's story is set in 1820s Russia, both in the city and the countryside, and it follows the fates of one Eugene Onegin, a Russian aristocrat and dandy who is bored with life. He became a literary (stereo)type called a superfluous man, and he has served as a model for many subsequent literary heroes of Russian literature. The novel also portrays a wide cast of other characters, usually very archetypically Russian.

The story is told by a narrator who is basically a fictionalized version of Pushkin's public persona. His tone is sophisticated and worldly, and he intimately addresses his readers who are treated with many adorable and snarky Shout Outs that expand nicely on its relatively simple plot and characters. The tone of the book manages to be engaging, thrilling, exciting, hilarious, sad, bittersweet and utterly tragic. The work is rightly praised for its narrative virtuosity and master poetic form.

Pyotr Ilyich Tchaikovsky adapted the novel as an opera. In 1958, the opera version was made into a film. A film adaptation of the novel starring Ralph Fiennes and Liv Tyler was made in 1999.