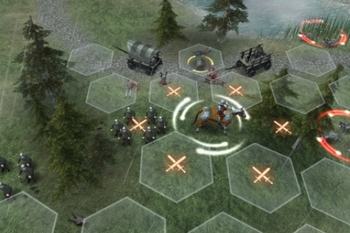 As the name implies, the player controls units on a map divided into hexagons. During a player's turn, they can move their units and attack. When all moves have been made, the player can end the turn, which allows the next player to move. The game has a single-player campaign and multiplayer mode. The player can select one of four races: humans, elves, dwarves, and greenskins.

In the campaign, you can upgrade your castle between missions, recruiting and improving your units and buying spells and potions. Almost every mission has one or more teleporter, which can be used to summon a certain number of units from your castle. The castle's teleporter can be upgraded to increase that limit. Upon completion of a mission, the player is awarded a gem and a certain amount of gold, based on how many units are left alive. Gems are used to upgrade the castle, while gold is used to recruit units, buy scrolls and potions, and to summon units using teleporters. Only hero units can use scrolls and potions. If you have a jeweler building in the castle, you can exchange gold for gems and vice versa.

While units differ from race to race, the basic types are militia (cheap and weak), infantry (strong melee troops), missile (e.g. crossbowmen, archers, riflemen), artillery (e.g. catapults, ballistae, cannons), pikemen (anti-cavalry), cavalry (more damage after a certain number of hexes traveled in a straight line), and mages. Greenskins lack any artillery or cavalry. Human crossbowmen are unique among missile troops in that they can't move and attack on the same turn. They are also the humans' only missile troops, while other races tend to have two types each (e.g. dwarves have axe throwers and riflemen). Humans have only one artillery unit (catapult), elves have two (ballista and scorpion), and dwarves have three (cannon, hellfire, and mortar).

The human story focuses on a knight named Percival Kent, who is suddenly forced to deal with a greenskin invasion. He learns of a powerful orc chief who is rallying the tribes against the Empire. Meanwhile, the Empire has other enemies, who take advantage of the situation and attack, like the elves and the dwarves. At least the dwarves quickly agree to a truce and a temporary alliance, since they hate the elves.