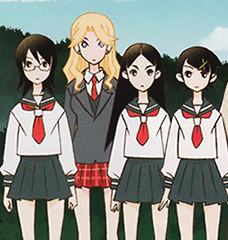 Guess.
"Shorts to school? Man, you kids in Maple Wherever just do whatever the hell you want, don't you?"
— Sharita Williams, Ethan, Suspended
Advertisement:

New Transfer Students in places where school uniforms are a cultural default setting often wear their old ones until the school can provide them with a new one. In fiction, this shows the newcomer or outsider. When they get the current school uniform, this indicates they've been assimilated. If the student is meant to be a Fish out of Water, they will keep their old uniform throughout the series. In Japanese media, even rebels don't choose to abandon uniforms entirely; in American media they will do this even if the new school doesn't have uniforms. Compare the Non-Uniform Uniform.

For characters Trapped in Another World, having this is not just a case of having a Limited Wardrobe, but to remind the audience that this character is not native. Naturally adopting local clothing is a sign of Going Native. A younger version of Still Wearing the Old Colors.