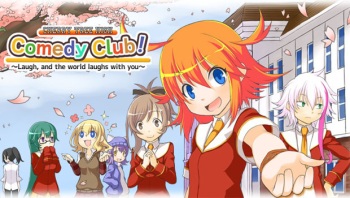 Laugh, and the world laughs with you!
Advertisement:

Genki Girl Miley Verisse has decided to re-found the famed comedy club at Cherry Tree High. However, she's informed by her Arch-Enemy, Student Council President Octavia Richmond, that she has to have at least five members to form a new club... when, counting her roommate Harriet Sinclair, she only has two. With just over a month left until the deadline, can Miley gather enough new members to form the club?

The game was originally developed by doujin circle 773 using RPG Maker XP, and localized outside of Japan by Nyu-Media.

The Japanese website for the game can be found here

, while the English-language site is here

. The game can be bought at the game's webpage, GamersGate, Desura, the Capcom Store, GameStop and Steam.

There are two other games in the Cherry Tree High series: I! My! Girls, a direct sequel Kinetic Novel in which Miley manages the club while dealing with the student council, a rival entertainment club, and a new transfer student; and Girls' Fight, a Card Battle Game Spin-Off in which Miley's punk rock friend is part of an inter-school fighting tournament.

I! My! Girls! provides examples of: