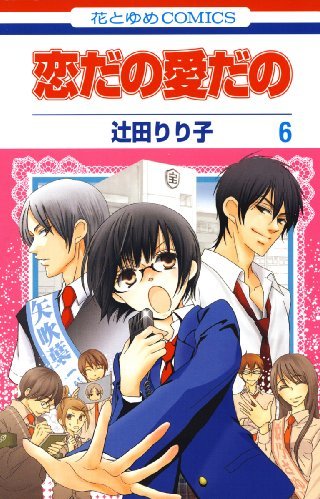 Kanoko Naedoko constantly changes schools but she never makes friends and doesn't get along with people very well... which is more than okay with her... as she considers herself a perfect observer.

Her hobby is observing the students in all of the different schools she is transferred to, indeed her notes are journals of the most colorful classroom drama.

But what will happen when Kanoko becomes involved with Tsubaki Haru, Momoka Hanai and Natsukusa Touta, her classmates at her 99th school? Will she become more than just an observer this time?

Warau Kanoko-sama was serialized in the LaLa DX magazine from 2007 to 2009 and later compiled into three volumes. Tokyopop licensed it in the US, but only released two of the volumes until its shutdown.

It also has a sequel named "Koi Dano Ai Dano" (lit Love and Like and), which features Kanoko and her friends in high-school. Kanoko has entered Takara no Tani High School with Tsubaki. Planning to live a normal high school life as a "refreshing girl", nevertheless Kanoko got dragged into the competition between the school's cultural cubs, and she was forced to join the on-the-verge-of-disbanding Newspaper Club. This sequel was serialized in the same magazine from 2010 to 2016, and compiled into twelve volumes.

And so join our heroine in her brilliant yet mischievous endeavors!

There is also a collection of side-stories, mainly focusing on minor characters around Kanoko and Tsubaki, titled Koi Nashi Ai Nashi.