Film / That Obscure Object of Desire 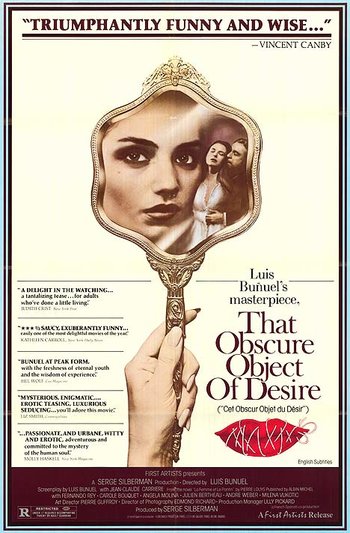 The movie is a Black Comedy Drama about the May–December Romance of a well-to-do older man, Mathieu (Buñuel regular Fernando Rey), and the young and beautiful Conchita. She claims to be 18, though she is obviously not, but the strangest thing about her is that her appearance interchanges into that of two women (by virtue of her being played by two actresses, Carole Bouquet and Ángela Molina). In any case, the romance is otherwise utterly weird, as Conchita in both incarnations never gives in to the advances of Mathieu; at times she flees from him but on other occasions she appears ready to let him have his way with her... but in the last moment she never does. He becomes obsessed with Conchita but she always eludes him.

Tropes in That Obscure Object of Desire include: