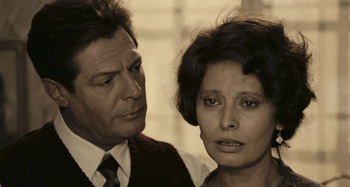 A Special Day (Una giornata particolare) is a 1977 film from Italy directed by Ettore Scola.

It stars Sophia Loren and Marcello Mastroianni in one of the thirteen films they made together. It is set on May 8, 1938, the day of Adolf Hitler's state visit to Rome to meet Benito Mussolini. A de-glammed, makeup-free Loren plays Antoinietta, a middle-aged housewife. She's little more than a slave, cooking and cleaning for her brutish, uncaring husband Emanuele and their six children.

When Antoinietta is left at home in the apartment while everyone else goes out for the fascist parades and rallies, she winds up meeting a neighbor from the other side of the apartment complex. Gabriele (Mastroianni) is an announcer for Italian radio who has just gotten fired from his job for being a homosexual. He is facing imminent deportation to Sardinia. The two lonely people, left behind as everyone else puts on a display of fascist patriotism, form a bond.