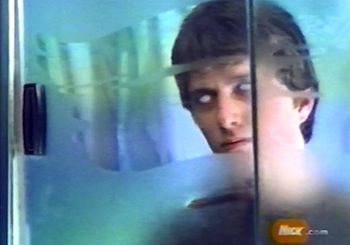 CryBaby Lane is a made-for-TV horror movie that was shown once on Nickelodeon's revived SNICK block. Only once. It's claimed that there were too many parental complaints regarding its creepy and disturbing content, leading to its one-night-only fate (and Nickelodeon's own denial of the film's existence). Because it was only shown once in 2000 and never released on DVD/VHS, it was assumed that there were no copies of it floating around.

That was until August 2011, when somebody asked about it on Reddit and a user by the name of "firesaladpeach" claimed to have recorded it on VHS. The Redditors got it up and streaming on YouTube, confirming that yes, Cry Baby Lane existed. The attention drawing from this lead to TeenNick re-airing the film once again as part of their NickRewind block. It was soon taken off of YouTube, but has been put back up by multiple people to ensure it doesn't once again become a lost film.

On its original airing, the film was introduced by Melissa Joan Hart, who not only wished up a hot guy to view next to her, but was also in her Clarissa haircut.

The plot revolves around a legend of a pair of conjoined twins that were separated at death. One of the twins was good, and the other was evil. The good twin was said to have been buried in the town cemetery, and the evil twin was buried in a grave near the farmhouse where he was born. Two brothers decide to hold a seance on the good twin's grave, but it turns out that the good twin was actually buried at the farmhouse and they've awakened the spirit of the evil twin. The evil twin then goes around possessing everyone, including the older of the two brothers. It's up to the younger brother to set things right again.