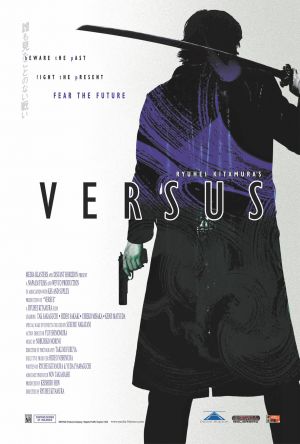 Ryuhei Kitamura's Versus is a movie released in the year 2000. It is an insane, over-the-top romp of violence involving zombies, Yakuza, assassins, two very strange policemen, an immortal villain and Prisoner KSC2-303, played by Tak Sakaguchi.

Newly escaped from prison, Prisoner KSC2-303 and his friend meet up with the group of Yakuza who arranged their escape. However, things go horribly wrong when a fight breaks out and one of the Yakuza is shot. Moments later, he rises from the dead and tries to kill them, only to be shot down again by the others. While the Yakuza are occupied with testing this new development by murdering the second of the escapees, Prisoner KSC2-303 takes the opportunity to escape along with girl the Yakuza had kidnapped. In their chase, the Yakuza team realise that the forest was the place they buried their victims and the zombie-victims are far from happy.

Soon enough, the man behind the zombies arrives. He is a psychotic immortal who plans to use human sacrifice and the power of the forest to open a portal to the 'other side'.

A sequel and an American remake were in the pipeline at one point, but there hasn't been any movement on either in years.

Not to be confused with the Let's Play series by AttackingTucans and (sometimes) JoshJepson.

This movie contain examples of: