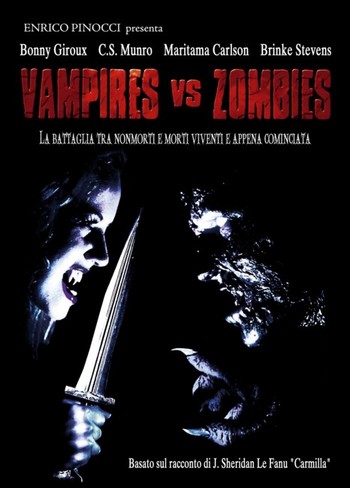 Vampires vs. Zombies (a.k.a. Carmilla, The Lesbian Vampire) is an independent horror film (very) loosely based upon Joseph Sheridan Le Fanu's classic 1872 novel Carmilla. Unlike Le Fanu's story, however, most of the action in the film takes place inside a car. The title and cover artwork were obviously inspired by the then-current horror film Freddy vs. Jason, but the movie itself bears less resemblance to this counterpart compared to other, more blatant mockbusters from The Asylum.

When young Jenna becomes affected by a mysterious vampiric disease, she begins to hallucinate, and her father whisks her away on a journey to find the source of the infection. On their way to the hometown of Baroness Vampire Carmilla, suspected to be the cause of the problem, the two encounter a friendly General, school-girl zombies, cannibals, and of course, the power-mad, evil Carmilla.