Film / When a Killer Calls 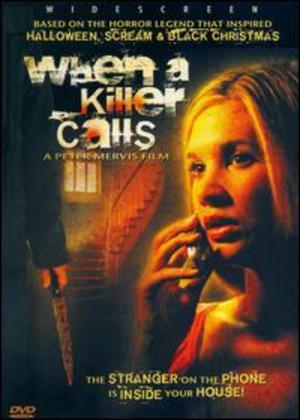 "Have you checked on the girl?"
— The Caller

When a Killer Calls is a 2006 Slasher Movie released by The Asylum, the company's rip-off of (what else?) the When a Stranger Calls remake released the same year.

Just after sunset, Linda Hewitt and her two young children, Holly and Ryan, are butchered by a sadistic knife wielding psychopath, who documents the family's deaths with his camera phone. After the slaughter, the killer methodically washes up, and leaves.

Elsewhere, Trisha Glass, former babysitter for the Hewitts, has taken a babysitting job for the Hewitts' friends the Walkers, who are on their way to a dinner party and in need of someone to look after their young daughter, Molly. As Trisha and Molly get to know each other, the Walkers leave, but on the way to their appointment, they are murdered by the Hewitts' killer, who they obviously knew. With the Walkers dead, the killer disposes of their bodies, and heads to their home, killing their neighbor, Charlie, when he arrives. During this time, the killer sends creepy phone calls and text messages to Trisha, starting with just heavy breathing before escalating to threats. Trisha thinks nothing of this, dismissing the calls as jokes, possibly perpetrated by her boyfriend Matt, but as they continue, she calls the police, who inform her that they may be able to trace the caller's location if he continues his harassment.

Put at ease by this, Trisha is overjoyed when Matt shows up, but that quickly turns to disappointment when he reveals he has dragged his obnoxious stoner best friend Frank, and Frank's equally over the top girlfriend Chrissy, along with him, due to the two needing to lie low after Frank pulled a gun on some rival punks outside a bowling alley. As both couples get comfortable and wait out both the police who are after Frank, and an oncoming storm, the killer enters the house after sending Trisha photos of his victims. He stalks and systematically whittles down the stragglers, while still continuing to taunt Trisha, saying he is doing this all for her, that he will eventually get to her to, very soon.